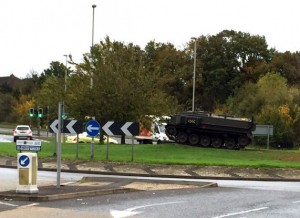 The A28 is the main route serving the south and west side of Ashford. Improvements have already been made from the A28 ‘Tank’ roundabout up to and including its connection with the M20 at Junction 9.

A proposal to change the A28 between the ‘Tank’ and ‘Matalan’ roundabouts into 2 lanes each way is being looked at again following the award of Local Growth Funding from the Department of Transport to the South East Local Enterprise Partnership.

The scheme is an improvement of the existing road and it has been determined by the Planning Authority that it is permitted development and does not require planning approval.

The scheme objectives are:

A public exhibition is being held at Godinton Village Hall, Loudon Way, Ashford on the following dates:

Come along to one of the sessions above to find out more about the scheme. Alternatively, if you have any questions or comments, you can contact us at chartroadmajorproject@kent.gov.uk.

Read the Chart Road newsletter (PDF, 785.7 KB) for more information about the scheme and details of the public exhibition.