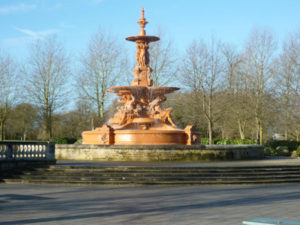 The Hubert Fountain in Victoria Park has had its designation upgraded to II* by Historic England.

The listing describes the fountain as “an ornamental cast iron fountain cast by the French foundry of the Val d’Osne, the largest art cast iron maker in France, first displayed at the 1862 International Exhibition in Kensington, then situated in the grounds of Olantigh Towers, Wye but moved to Victoria Park Ashford in 1912, is listed at Grade II* for the following principal reasons:

“This monumental cast iron fountain was cast c 1862 by the French foundry of M. Barbezat and Co. at the Val d’Osne, Foundry, Haut Marne. The foundry, started in 1835, by Jean Pierre Andre Victor, inventor of the cast iron ornamental technique, became the largest art cast iron maker in France near Paris and acquired a worldwide reputation for monumental art cast iron fountains with large figures after antique and classic models after exhibiting at the 1851 Crystal Palace Exhibition. The designer has not been identified but many celebrated artists of the Ecole des Beaux Arts had their works cast here.

“The fountain was first erected in the Royal Horticultural Society’s gardens in London for the Second International Exhibition of 1862 as the Hubert Fountain. It was one of two large fountains exhibited, the other fountain, cast by the foundry of Antoine Durenne and called the Ross fountain after its purchaser, is now situated in West Princes Street Gardens in Edinburgh and is listed at Grade A by Historic Scotland.

“The Hubert Fountain is illustrated in an engraving on page 65 of ‘Cassell’s Illustrated Exhibitor’ of 1862 and on page 66 is a reference to ‘two French fountains of exquisite design and perfect form. One by Durenne is a good specimen of casting; and the other, shown in our engraving is a fine monumental work produced at the foundry of M. Barbezat and Co., the successors of Andre at the Val d’Osne, in Paris.’ The catalogue lists the medals awarded to M. Barbezat and continues ‘His works are no less artistic than beautiful and among the bronzes and iron works in the Exhibition we find objects designed by artists of high class, Lienard, Mathurin Moreau, Alfred Jacquemard and Charouse.’

“After the 1862 Exhibition the Hubert Fountain was erected in the grounds of Olantigh Towers at Wye, about five miles from Ashford, but this mansion was destroyed by fire in 1903. During the rebuilding of that property in 1910 the fountain was purchased by Mr. George Harper, an antique shop owner and art collector who was also at that time Chairman of the Ashford Urban District Council. He made an anonymous offer to present the fountain together with two huge cast iron stags to Ashford on condition that the Council would dismantle the fountain and re-erect it at Victoria Park at their own expense. The Council decided to reject the offer on the grounds of expense but then Harper agreed to pay for the dismantling and re-erection if the Council provided the foundations, water supply and would provide a water display every year on his birthday. The fountain was dismantled and brought to Ashford in sections by traction engine and on 24 July 1912 the fountain was formally presented to Ashford. Three weeks later Harper was run over and killed by a train.

“The life-size cast iron stags which stood on the plinths at the bottom of the steps when the fountain was first re-erected were removed at a later date.