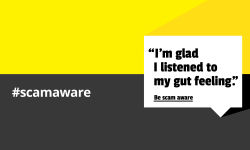 Investments in fake diamonds, bogus stocks and shares and fine wines that don’t exist are costing scam victims an average of £20,000 each, reveals Citizens Advice. Analysis of 5,000 scams reported to the consumer champion between January and March 2016 show how fraudsters are conning savers and investors out of thousands of pounds.

Cold calls, online adverts and fake websites are used to offer people attractive investments which promise steep increases in the value of their investment or strong dividends.  But the return on their investment fails to materialise and investors are unable to contact the trader.

Today Citizens Advice and the Chartered Trading Standards Institute launch Scams Awareness Month – a national campaign to help people avoid falling prey to scams. The campaign urges people to follow a three-step rule – get advice, report it, and tell others about it.

The research also finds scammers use a variety of tactics to get people to part with their cash, with people losing an average of £2,500 across all types of scam.

Methods include vishing whereby scammers cold-call people in a bid to get their bank details, and offers of fake services, such as telling people their computer has a virus which they can fix remotely.

Precious metals and gems – people are cold-called with opportunities to invest in diamonds and gold, which either don’t exist or aren’t the product they’d been offered. One man paid £150,000 for diamonds which although genuine, turned out to be worth a fraction of the cost.

Fine wine – people are persuaded to buy vintage wines with promises that their value would increase over time. One person invested £500 after being offered a steep increase and cash back from the trader. The money never arrived, and when they tried to cancel they were unable to contact the trader.

Stocks and shares, bonds and ISAs – people are contacted by scammers offering to trade on their behalf or to sell their current investments at inflated prices, which can cost people £13,500 on average. One individual invested £65,000 with a share trader who offered them 3% dividends every month. They contacted Citizens Advice after the trader made excuses not to give the money back.

Pensions were also targeted, with people contacted out of the blue with offers of free “advice” on how to increase their investment.  Previous research from Citizen Advice shows that as many as 10.9 million people received unsolicited contact about their pension in the last year, with scammers offering free advice as a step towards tricking them out of their pension.

“Scams can devastate people’s finances and leave them empty handed.

“Fraudsters vary their tactics to target different people, from pushing cut-price offers to those on a budget, to high-interest investments for those looking to grow their savings. We’re warning people to be on their guard against opportunities that come of the blue and far exceed the deals you’d get elsewhere – they may well be a scam.

“If you think you’ve lost money to a scam, seek advice as soon as possible so you have the best chance of getting your money back. It’s vital that people who have fallen prey to fraudsters alert others to stop the scam from spreading, and report it to the authorities so we can stop con-artists from getting away with it.”

Leon Livermore, chief executive of the Chartered Trading Standards Institute, said: “Anyone can fall victim to a scam and while the criminals’ methods are becoming increasingly more sophisticated the advice remains the same, if it looks too good to be true, it probably is.

“Trading standards teams at local councils across the UK are working hard to protect consumers but it is vital that individuals do what they can to protect themselves.

“All too often scam victims do not realise they are being scammed until it’s too late and the criminals have bled them dry.”

What to do if you suspect a scam

Get advice from the Citizens Advice consumer service 03454 04 05 06 who can provide advice and pass details on to Trading Standards.

Tell a friend, neighbour or relative about any scams you become aware of.