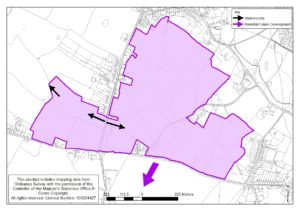 We produced a composite map which showed the indicative areas of development on the three sites to the South and West of Kingsnorth as indicated in the 2016 version of the Draft Local Plan.

This site lies to the north of the Steeds Lane/ Magpie Hall Road axis and either side of the Ashford Road. The site is in predominantly agricultural use with scattered homes and clusters of houses with a more linear pattern of development along Ashford Road adjoining the site.

This site is proposed for residential development of up to 400 units.

The northern extent of built development here needs to be carefully controlled. Development should sit below the ridge line that lies south of Kingsnorth village, with the ridge and the space between it and the village itself forming a strategic open buffer to protect the setting of Kingsnorth and create a sense of separation from the new development.

Careful consideration will need to be given to the impact of the proposed development on the parcel of Ancient Woodland (Isaacs Wood) within the boundary of the site on its eastern side. This could include the development of an appropriate management and access strategy, but will always involve its conservation and enhancement as part of the overall design of the area.