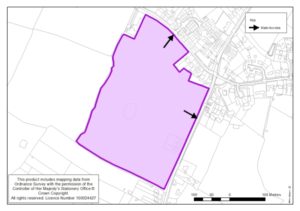 We produced a composite map which showed the indicative areas of development on the three sites to the South and West of Kingsnorth as indicated in the 2016 version of the Draft Local Plan.

This site lies to the south of Pound Lane and west of Ashford Road. It is flat, arable land that provides part of the setting of the village of Kingsnorth, which lies to the north and east. The site also adjoins the proposed Court Lodge Farm site allocation to the west.

The southern part of the site should remain free from development so that it may form part of a broader swathe of open space that runs south of Kingsnorth (to the east) to the extension to the Discovery Park (to the west) and provides for the physical separation of Kingsnorth village from new developments to the south. This area should be publically accessible with pedestrian and cycleway links created across it that will form part of a wider pedestrian / cycleway network linking Discovery Park.

The capacity of the site will be determined following a comprehensive masterplan exercise, but is proposed with an indicative capacity of 150 dwellings.