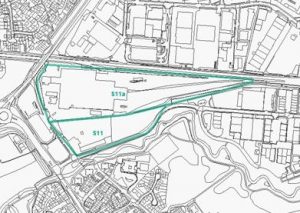 The S11 site as specified in the 2016 version of the Draft Local Plan has been split into two sites. S11 now refers only to the front site, the Brett site, was included in the 2012 Urban Sites and Infrastructure DPD and proposals for this have not changed except the requirement for 30% affordable housing has been omitted.

The site is considered suitable for a residential uses and should be developed in accordance with an approved masterplan.

The scale of any residential development should relate well to the surrounding area. Residential development along the Leacon Road frontage should be primarily 3 storeys in height reflecting a narrower corridor along this part of the route reducing in scale from development allocated in the town centre to the east. However, the prominent eastern and south western corners could accommodate an additional one or two storeys to create some variety and interest in the streetscape. Development should have a strong built form with well designed frontages to reflect the high quality urban route and a positive built return frontage should also be created along Beaver Lane.

. Access to the site should be provided from Leacon Road and/or Beaver Lane. A small strip of land along the southern boundary of the site will be required to fully create the parameters for the Leacon Road / Victoria Road route and this land should not be developed.

The site lies opposite the Stour river corridor which lies within the identified green corridor area and proposals on this site should make a positive contribution to the setting, role, biodiversity, accessibility and amenity value of adjacent green corridor area.