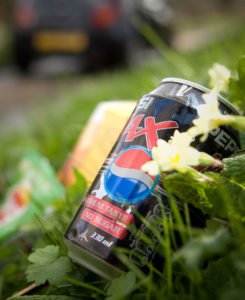 We all want to live in a clean and pleasant borough which is why from next week (W/c 5th September) Ashford Borough Council will be working in partnership with a private company to help tackle littering and other environmental blights in the borough.

The council will be teaming up with Kingdom Local Authority Support Services (Kingdom) who will undertake litter enforcement on behalf of the council over a 12 month trial period. If the trial proves successful the council will look to procure a contracted service going forward.

Officers from Kingdom will have the authority to issue a £75 on the spot fine for those caught deliberately dropping litter or not clearing up after their pet, and there will be no reduction in cost for early payment. The officers do not have a target for issuing fines, but the council anticipates a significant number will be handed out over the 12 month period.

Three officers will be on patrol across Ashford and Tenterden. Two will be located in Ashford town centre and one will monitor Tenterden. Officers are flexible in their approach and are able to move to different locations if required, for example if places are in need of additional enforcement due to specific problems or major events.

The project is likely to be cost neutral but if any profits are made they will be being pushed back into supporting other environmental projects within the council, including additional dog warden patrols and equipment for litter education and enforcement campaigns.

The identity of the wardens will not be kept hidden from the public as they will wear uniforms similar to the council’s parking enforcement officers. Officers will also wear body-worn cameras which the council hopes will improve payment rates and reduce appeals.

Ashford is following in the footsteps of seven other Kent authorities, including Maidstone Borough Council, who Kingdom already works successfully with.

“Despite launching a long term anti-littering campaign in the form of Sir Litternot to discourage this type of behaviour in the borough, it is disappointing to see people are continuing to drop litter and other waste in their own town.

“Kingdom is very experienced and we expect them to take a firm but fair approach when they are dealing with people caught littering in Ashford and Tenterden.”