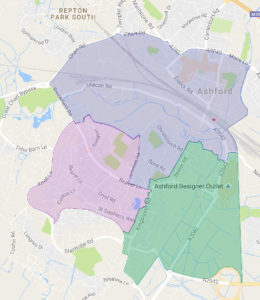 On Thursday, Ashford Borough Councillors will be shown proposals for ward boundaries that are being submitted to the Local Government Boundary for England (LGBCE) by the Council. South Ashford Community Forum (SACF) believe that the ABC proposal fails to use the opportunity to address issues with the existing warding arrangement, identified in SACF’s submission and in some respects makes them worse.

The submission is the Councils’s response to the LGBCE’s consultation on warding arrangements, undertaken as part of an Electoral Review of the Borough.

Proposals have to be submitted to LGBCE by Monday, after which they will consider all submissions and produce their Draft Recommendations. A consultation on these is due to start on 8 November 2016.

The ABC proposal can be viewed on the Council Agenda page on the ABC website, https://secure.ashford.gov.uk/committeesystem/ViewAgenda.aspx?MeetingId=3030&MemberRef=23. We have shown an approximate representation of the proposal for South Ashford wards in the attached plan.