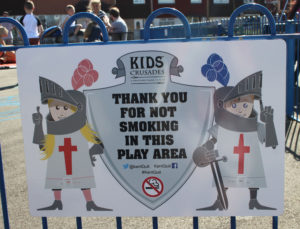 The Chartered Institute of Environmental Health (CIEH) is calling for voluntary ‘no smoking zones’ to be implemented across the UK wherever children play or learn.

In a bid to help protect children’s health and reduce the perception among young people that smoking is normal behaviour, the CIEH launched a campaign on World Environmental Health Day (26th September 2016) to extend non-smoking areas around places such as schools and play parks, or locations where young people learn or play.  www.cieh.org/world-environmental-health-day.html

To support their cause the CIEH produced a selection of case studies demonstrating the benefits of introducing smoke free environments; Ashford’s smoke free play areas initiative is among those highlighted along with other local authorities including Nottingham City Council and Coventry City Council.

In April 2015 Ashford Borough Council (ABC) was invited by Kent County Council (KCC) Public Health to pilot a smoke free play area project in a bid to provide a non-smoking environment for children and their families to enjoy, help protect children from the effects of second hand smoke, and reduce the number of children who start smoking after being influenced by those who do.

ABC rolled out smoke free pilots in a number of play areas across the borough including The Stour Centre, Kilndown, Bullied Place and Newtown Green. They created fun pavement games, which are a fantastic way to keep children active, as well as engaging signage which encourages a smoke free area and gently reminds people not to light up.

Canterbury City Council were inspired by our project and in May 2016 introduced a similar scheme in St Stephens Park, with another four parks to also implement the scheme in the Barton, St Stephens and Northgate area of Canterbury.

ABC’s smoke free play area initiative not only continues to be a success, but strives to reduce the amount of cigarette litter in play areas too, making them a cleaner environment for the community. In conjunction with the council’s new litter enforcement pilot, a £75 fine will be issued to those who deliberately drop cigarettes.

KCC Director of Public Health, Andrew Scott-Clark said: “We are pleased that the Chartered Institute of Environmental Health has recognised our smoke free parks projects and we would encourage other district councils, across Kent and nationally, to follow Ashford’s lead and set up voluntary no smoking zones.

“The aim is to provide a smoke free environment for children and their families to enjoy, help protect children from the effects of second hand smoke, and reduce the number of children who start smoking after being influenced by those who do. In the process it also reduces the amount of cigarette litter in play areas, making them a cleaner environment for the whole community.”