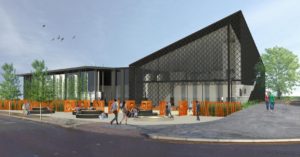 Ashford Borough Council’s Planning Committee, this evening, voted overwhelmingly in favour of permitting two of the planning applications for land at the junction of Beaver Road  and Victoria Road, dubbed ‘Victoria Way’ by developer U+I.

Councillors generally spoke in favour of the application for a brewery, with shop, bar and restaurant, three commercial units and 216 residential units (case ref.: 16/01157/AS) but some reflected concerns expressed by local resident, Mr. Hawkins, regarding adequacy of parking and potential traffic impacts. Concerns regarding the tenure and size of the apartments were also voiced by some. Council officers stated that parking had been increased by the applicant and any further increase would impact the viability of the proposals. It was stated that residents of the flats would not be eligible to apply for on street residents parking permits. Junction improvements agreed with KCC and funded by the Commercial Quarter development, were more than adequate to deal with the extra traffic created by the this and the Powergen site developments. Leader of the Council, Cllr Clarkson, said that the Council needed to reassure residents that traffic management was continuously monitored.

Similarly the only concerns expressed regarding for an Aldi superstore (case ref.: 16/01167/AS) related to parking and problems with trolleys being removed from the site. It was agreed that a condition relating to trolley management should be added to those recommended in the officer’s report.