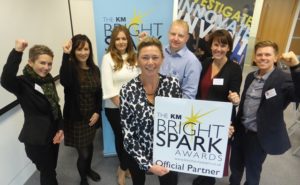 The community initiative, which aims to promote science, technology, engineering and maths (STEM), is a celebration of bright young minds. Entries are now open for student teams with exciting projects that feature cross-curricular collaborations in STEM subjects.

Integrated Technologies Ltd (ITL) is an awards partner, alongside Pfizer, Benenden Hospital Trust and Prendon Panels. The awards, which are open to primary and secondary school teams of all ages, invite students to showcase their science projects in front of a panel of industry experts; known as ‘the dragons’. 2017 will be the third year that ITL have sponsored the awards.

The annual awards have a Dragon’s Den-style format with students invited on stage to showcase their science projects with the chance to win prizes. The three categories are: innovation, investigation and invention.

Carl Lincoln, ITL’s Marketing Co-ordinator, attended the launch. He said:
“Getting young people involved in science and engineering is fundamental to our business and to the wider community as well.”

“When we started sponsoring the Bright Spark Awards back in 2015, we actually used it to find ourselves an apprentice. We were struggling to find someone and we thought what better way to do it than try before you buy by seeing people’s presentation and engineering skills in practice. We ended up taking someone on and he’s already doing a fantastic job!”
He added,

“It’s fantastic to support this initiative and recognise the intelligence and curiosity of the students. The STEM subjects can often be seen as difficult, and inaccessible – The KM Bright Sparks Awards showcase the cool side of these subjects, and how a career in these sectors can be not only fulfilling, but fun too.”

Robert Crook, Senior Director for Chemical Research and Development at Pfizer, said:
“It’s really important to get young children involved and enthused with science and build the next generation of scientists who are hopefully going to bring forward the next round of scientific discoveries.”

Finalists will be filmed in advance in school to show the detail of the project. This is screened at the event before the dragons begin their questioning of students.

Victoria Prenczek, from Prendon Panels, is keen to encourage more girls to enter the competition.
“As a businesswoman, it’s really important to me to encourage young girls to get involved in careers that are a bit out of the norm, perhaps engineering or science, something you wouldn’t necessarily expect them to be doing,” she said.
Event dragons include representatives from Pfizer, ITL, Benenden Hospital Trust, Prendon Panels, Hectic Lifestlyes, Golding Homes and BAE Systems.

The most impressive entries will be invited to the competition final at Discovery Park, Sandwich on the Friday 7th July where the champions will be presented with a cheque of £500.

Carl added:
“We can’t wait to see what imaginative projects will be revealed at the 2017 awards – if past years are anything to go by, the calibre of entries will be high!”

To find out about the awards scheme visit KM Charity Team website.