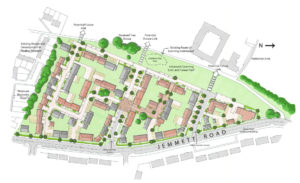 Ashford Borough Council (ABC) has granted permission for up to 154 houses on the site of the Ashford College Campus in Jemmett Road, five years after the Planning Committee voted to permit the development.

Plans for the college to vacate the site go back to 2008, when an application made by South Kent College was approved for up to 241 dwellings on the site. This was linked to a proposal for a new campus (The Ashford Learning Campus) at the junction of Beaver Road and Victoria Road. The scheme was not implemented due to funding problems.

The application for renewal of the permission in 2011 resulted in a new scheme being drawn up with a reduced number of dwellings to meet the Council’s residential space standards.

The Planning Committee voted to permit the development, subject to a maximum of 154 dwellings being built on the site, on 21 September 2011. The resolution to permit was dependent on the applicant entering into a Section 106 agreement for contributions toward the provision of infrastructure and services. Again funding problems prevented implementation of the scheme. A Section 106 agreement has now been exchanged between ABC and West Kent & Ashford College, as successors to South Kent College.

The ABC Case reference is 11/00405/AS, we have posted the notification under Local Information / Planning and Development / Planning Notice today