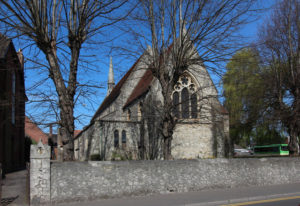 When the South Eastern Railway came to Ashford in 1842 and the large Railway Works opened in 1847, Canon Alcock, the Vicar of Ashford, decided that a new church was needed in South Ashford. An appeal was launched in 1860. With local and nationwide help from the shareholders of the Railway, Christ Church was opened on May 1st 1867. It cost £4,219.1s.1d to build and seated around 600 persons.

The church was built by a local firm Steddy, Joy and Steddy, and the ground was given by the Lord of the Manor, Mr. G.Jemmett. We have roads surrounding the church called Francis, William, Bond and Jemmett. There is also a memorial to this gentleman in St. Mary’s Church, Ashford.
Christ Church was known as “The Railwayman’s Church”, with the pub opposite called “The Locomotive”. Originally a curate from the Parish Church of St. Mary’s Ashford was responsible for Christ Church, but in 1889 the church was consecrated. The first Priest-In-Charge was the Rev.A.W.Palmer.