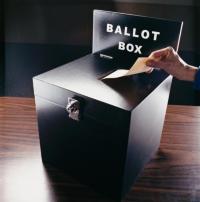 Casual vacancy in the office of Borough Councillor

Notice is hereby given under Section 87 (2) of the Local Government Act 1972 that following the death of Harold Apps a casual vacancy has arisen in the Office of Borough Councillor for the Victoria (Ashford) Ward of Ashford Borough Council. To call an election a request must be made in writing to the Returning Officer at the address below by TWO local government electors in the local authority area.