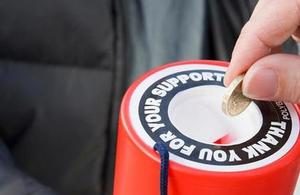 The Charity Commission, together with organisations helping the victims, have issued advice on safer giving in the wake of the terrorist attack in Manchester. The action follows steps taken by the Virgin Giving website after the Westminster attack, to suspend payment to site users until they had verified that the money would go to those for who it was collected.

The Charity Commission is encouraging people wishing to support the victims of this week’s terrorist attack in Manchester to donate to a genuine charitable appeal.

It says that the great British public are always generous in their support for charities and this has already been reflected via the many giving sites set up to support the victims and families of the appalling attacks in Manchester.

The British Red Cross, which has been active on the ground in Manchester and has extensive experience of coordinating large fundraising operations, is supporting the appeal. Other genuine appeals launched to support people in Manchester are understood to now be pointing people towards the We love Manchester fund. The Manchester Evening News, who launched the We Stand Together, have joined forces with the We Love Manchester Emergency Fund.

The fund will support people who have been injured or bereaved by the attack. Donations will help alleviate suffering and ensure victims and their families do not face short-term financial difficulties. The Commission is taking the unusual step of encouraging people wishing to give to donate to the We love Manchester fund to reduce the risk of fraud and ensure funds donated reach those they are intended for.

The Fundraising Regulator, which regulates charity fundraising, has joined calls for the public to give safely.

The Charity Commission 25 May 2017
www.gov.uk/government/news/generous-public-should-make-sure-donations-go-to-genuine-charities-supporting-the-victims-in-manchester-says-charity-regulator