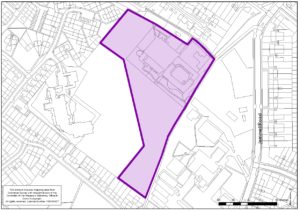 A proposal for a new school for Chilmington Green includes the temporary use of the South School site in Jemmett Road.

The Stour Academy Trust, which runs Finberry Primay School has been selected to run the proposed Chilmington Green Primary School. The announcement of the selection of Stour Academy Trust * states that the new school will open in 2018 on the South School site. Finberry Primary School operated in the South School building for two years whilst waiting for its new building to be constructed.

The site was the subject of a planning application for housing in 2007 and was allocated for housing in Ashford Borough Council’s (ABC) 2012 Urban Sites and Infrastructure Development Plan Document. ABC’s Draft Local Plan published last year also allocated the site for housing but states that “there are
current plans to re-use the school buildings for a period of time of no more than 8 years, as a temporary school to meet the education needs of development in the urban area”. There are conditions on the permission to develop the adjacent South Kent (Ashford) College site requiring that access to the South School site is provided.