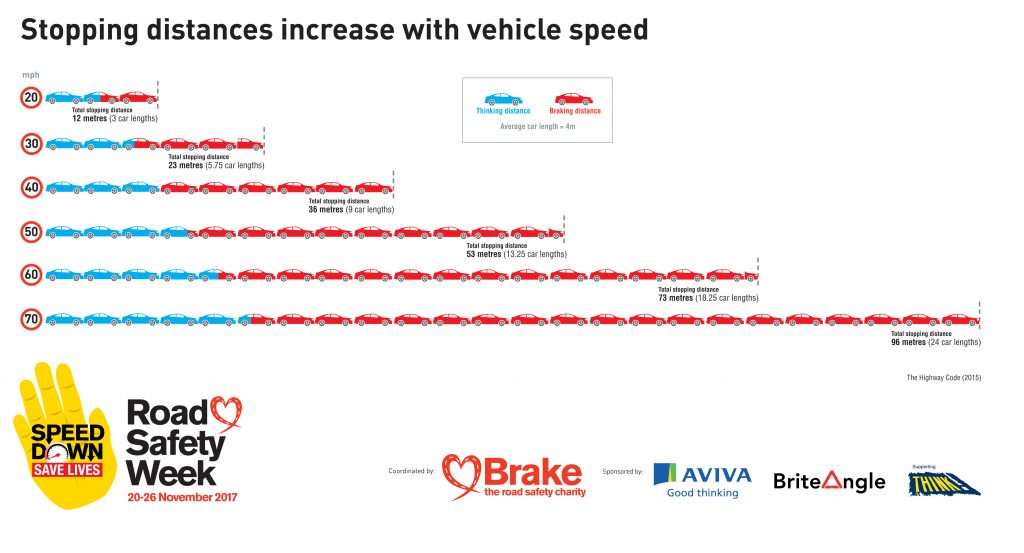 Stopping distances include the distance travelled while the driver notices a hazard and applies the brakes (thinking distance), and while the vehicle comes to a full stop from its initial speed (braking distance).

The stopping distances shown here are based on a reaction time of 0.67 seconds, which assumes the driver is alert, concentrating and not impaired. Driving when tired, distracted or impaired significantly increases reaction times, so the thinking distances should be regarded as minimums.2

The braking distance depends on how fast the vehicle was travelling before the brakes were applied, and is proportional to the square of the initial speed. That means even small increases in speed lead to significantly longer braking distances. Braking distances are much longer for larger and heavier vehicles, and in wet or icy conditions.3

Technology such as anti-lock brakes and stability control are designed to enable greater control over the vehicle, not shorten stopping distances. There may be a very small reduction in braking distance with modern technology, but not enough to significantly affect your overall stopping distance.4 Whatever technology a vehicle has, the basic fact remains that the faster you drive, the longer your stopping distance, and therefore the less chance you have of stopping in time in an emergency.