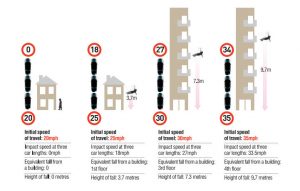 The risk of injury increases exponentially with impact speed. A crash at 30mph involves a lot more energy and destructive potential than a crash at 20mph.

Driving faster not only lessens drivers’ chances of being able to stop in time to avoid hitting someone or something. It also means if they can’t stop in time, they will hit with greater impact. The greater the impact, the greater the chances of causing serious injury or death.

The greater the impact speed, the greater the chance of death. A pedestrian hit at 30mph has a very significant (one in five) chance of being killed. This rises significantly to a one in three chance if they are hit at 35mph. Even small increases in speed can lead to an increase in impact severity.