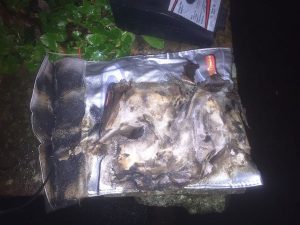 A quick-thinking mum saved her son from toxic smoke after a charging bag containing a remote control car battery, exploded.

The popping sound of the charging bag bursting at 11.15pm on Friday, 10 February, prompted Karen Major, to check on her 11-year-old son in bed.

Upon opening his bedroom door she found Sam fast asleep surrounded by thick grey smoke, with the battery charging in its charging bag on the floor next to him – burning the carpet.

She woke her son, turned the power off and got out of the house as quickly as she could before calling 999.

Once Kent Fire and Rescue Service was on the scene, crews entered the home wearing breathing apparatus and removed the battery in the bag. They then used a pressure fan to clear the property of smoke.

Karen said: “I was watching a film downstairs when I heard the popping noise and then noticed an acrid smell. When I saw what had happened in Sam’s room I considered throwing the battery out of the window, but I decided the best thing to do was to get Sam and I out to safety and call Kent Fire and Rescue Service.

“I truly believe the charging bag saved Sam’s life. If the battery hadn’t of been in the bag, I think things would have been very different. I will never let those type of batteries be charged in the bedroom again, especially not on carpet, and I’ll always use a charging bag.

“I contacted the toy manufacturer, not to blame them, but to urge them to encourage customers to buy charging bags when purchasing these sorts of batteries – they’re only about £7.”

Jason Visser, Watch Manager for Southborough said: “Sam’s mum did the right thing and got both of them out of the house as quickly as possible. This incident could have had a very different ending if the battery wasn’t in a charging bag – Sam had a very lucky escape. The overheating battery had the potential to be a silent killer – there were no flames, just toxic smoke and fumes.

“We were also able to fit new smoke detectors in the property.”

Following this near miss, Kent Fire and Rescue Service is reiterating safety precautions around charging batteries: