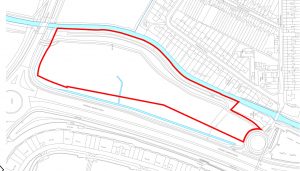 As reported by South Ashford on 19 September, Quinn Estates have submitted an Environmental Impact Assessment Screening Request for the site between the Romney Marsh Road, and the East Stour, to the South of Norman Road.

This article adds more information regarding the proposal and looks at the history of the site in relation to development.

The Screening request indicates the intention to construct up to 300 flats in blocks up to 10 stories high.

The proposal has been dubbed East Stour Park by the developer. 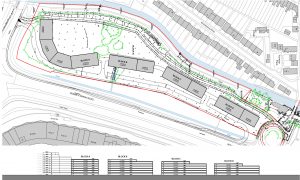 To date only the EIA Screening request has been published, but documents accompanying the request give an indication of the scope of the proposed development.

The largest and highest block is proposed to be at the south end of the site and will have a maximum of ten stories, facing onto Norman Road, reducing to .seven storeys. The second and third blocks will vary from seven down to five storeys, whilst the northernmost block will be of five and four storeys, nearest to the Riverside Inn. 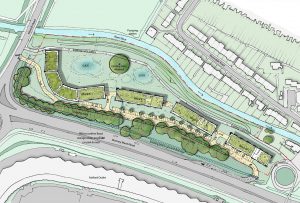 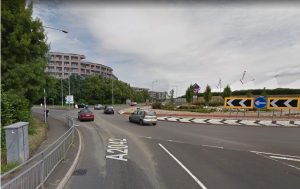 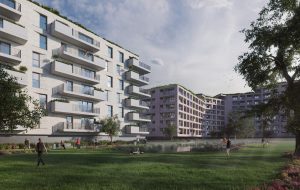 This particular plot of land has no history of planning applications but  we have researched history of proposals for this as a development site. 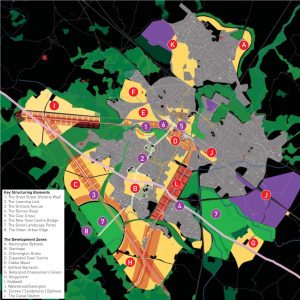 Proposals for development on the site go back to the publication of the Greater Ashford Development Framework in 2005, a document intended to provide an overall masterplan for the development of Ashford to 2031 following the Deputy Prime Minister’s decree that 200,000 new homes should be built in the south-east and identifying Ashford as one of a number of expansion towns.

In initial plans in the document the East Stour Park site was proposed as part of the expanded town centre where density of residential development was expected to be between 100 and 200 dwellings per hectare (dph). The area to the south of the site on either side of Romney Marsh Road was proposed as the ‘Canal District’, a mixed-use development area harnessing the great potential of associating development with waterside assets, including a new canal system, lake and linear park, having a lower development density of 50 – 100 dph. 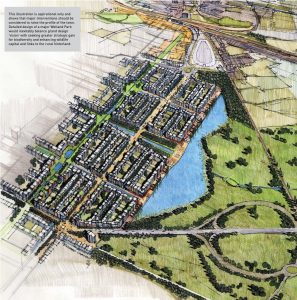 The Core Strategy of the Local Development Framework, published in 2008, identifying Ashford Borough Council’s Planning Policy to 2021, stated:
“In addition, the Canal District area was highlighted in GADF as a potential mixed use development area that could harness the potential of associating development with waterside assets and help to link the existing development at Park Farm and the proposed development at Kingsnorth with the main built-up area. However, floodplain constraints and, if these could be overcome, the need to implement ecological mitigation measures, mean that development in this location may not be practicable within the LDF period, if at all. Accordingly, the CS makes no provision for development in this area at the present time although this matter will be considered further in the first review of the CS.” 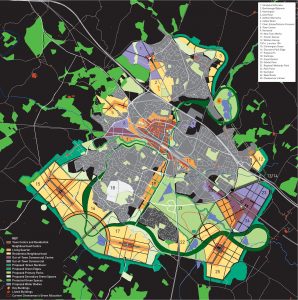 When ABC commenced preparation of their Local Plan to 2030 they asked landowners and developers to propose sites to include in the Sustainable Housing and Employment Land Availability Assessment (SHELAA). ABC then screened the sites against sustainability criteria.

The East Stour Park site was part of a submission referenced NO2 by the Council. The submission included a plot of land to the south of Norman Road and is shaded blue on the plan below. The submission proposed mixed use development comprising a hotel, filling station, leisure, food and non food retail and wetland park. The assessment identified the site as part of Ashford’s Green Corridor and the plot to the south of Norman Way as part of Willesborough Dykes, designated a Local Wildlife site. The assessment precluded development on the southern part of the submission area but not on the part that is the subject of the EIA screening request. The site was not included as a development site in the submitted Local Plan.

Another submission, referenced NO3, comprised the remainder of the land to the south of Norman Road through to Ashford Road together with an area to the east of Romney Marsh Road, coloured orange on the plan, was proposed for mixed use, much of the area allocated to residential development with the area beside and behind the Gallagher Way Retail Park as commercial and that to the West of Romney Marsh Road as Amenity/Wetland Park. The whole submission was screened out as unsustainable because it is part of the South Willesborough Dykes Local Wildlife Site. 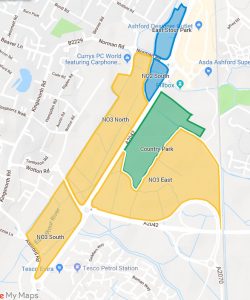 SHELAA sites NO2 and NO3 and proposed country park site

In the Kentish Express of 27 September 2018 it was stated that the developer of the proposed East Stour Park development had offered a piece of land to the east of Romney Marsh Road (shaded green in the diagram) as a country park “for concerts and outdoor events”. This plot was not included in any of the submissions for the SHELAA, is not identified as a development site in the submitted Local Plan to 2030 and is part of the South Willesborough Dykes Local Wildlife Site.

The East Stour Park site, together with the remainder of SHELAA site NO2, the whole of site NO3 and the plot indicated as a potential country Park are in Ashford’s Green Corridor.

The submitted Local Plan to 2030 states:

“The Green Corridor designation has been central to Ashford’s planning strategy and approach to green infrastructure since it was adopted in the 1994 Local Plan. It comprises a connected network of largely green open areas that are predominantly located alongside the Great and East Stour rivers, the Aylesford Stream, and other watercourses which flow through Ashford’s urban area. These riverside areas are largely undeveloped, due to being within the flood plain, and provide a unique opportunity for improving the quality of the urban environment.

“As much of the Green Corridor is located within the flood zone, it also acts as flood plain and water storage which prevents flooding, as well as being an important habitat for biodiversity. All along the green corridor highly valuable habitats for wildlife are found, providing an important network for the movement of wildlife through the urban areas, between designated nature sites and out towards the countryside. The Green Corridor falls within the Mid Kent Greensand and Gault Biodiversity Opportunity Area (BOA). Much of the Green Corridor is also designated as Local Nature Reserve (LNR) and includes a number of Local Wildlife
Sites (LWS).” 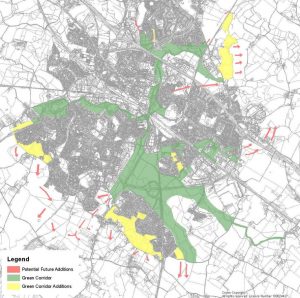 “The protection and enhancement of Ashford’s Green Corridor is a key objective. Development proposals within the identified Corridor designation (and proposed
extensions) will be permitted, providing that it is compatible with, or ancillary to, their principal open space use or other existing uses within them, and it can be demonstrated that the proposal would not harm the overall environment, biodiversity, visual amenity, movement networks or functioning of the Green Corridor.

“Other forms of development proposals, including those relating to an existing use within the Green Corridor will not be permitted, unless it would be in accordance with a site specific policy in this Local Plan; or where it relates to a) the redevelopment of a suitable brownfield site or b) delivers overriding benefits, and in either scenario, that it can be demonstrated that there would be no significant harm to the overall environment, biodiversity, visual amenity, movement networks or functioning of the
Green Corridor.

“Development proposals must take into consideration the appraisals, projects and management recommendations set out for the specific areas in the Ashford Green Corridor Action Plan, including the identified proposed extension areas to the designation.” 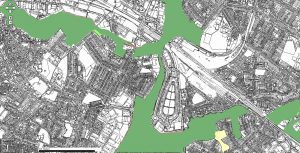 To the north of the site the Green Corridor is constrained by the transport infrastructure and associated development related to the International Station. The East Stour Park site may provide a funnel for wildlife into the constrained part of the Green Corridor, helping wildlife movement between South Willesborough Dykes and South Park and the Bowen’s Field wetland.

As stated above, there have been no planning applications for the East Stour Park site. Prior to those for the current buildings, a number of applications were made relating to the land now occupied by B & Q and the Gallagher Way Retail Park for industrial, commercial or retail development. in 1993 an outline application (93/01256/AS) was submitted for residential development – total 118 units on the site now occupied by B&Q. We currently have no details of the application or reason for the decision but it was refused.

One other application worth noting is 02/00208/AS, a “reserved matters application for 100 bed hotel with integral bar and restaurant providing seating for approx 120 diners, associated parking and including a wetlands display area”, on the site currently being developed as the extension of the car park for the designer outlet.