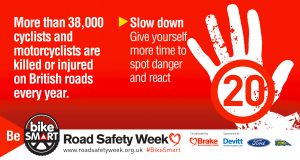 The vast majority (77%) of cyclist casualties are from incidents on roads with 30mph speed limits.15 At this speed, cars travel an average of 23 metres (or 5.75 car lengths) before stopping, and anyone hit by a car travelling at 30mph has a 20% chance of dying.

Driving more slowly will give you more time to spot danger and more time to react. It also means you can stop a lot more quickly. 20mph is the right speed in places where people live, work and play. Slow traffic makes more people want to walk and cycle in their communities.

Slow down on rural roads.

Cyclists are also vulnerable on roads outside towns and cities. In 2016, 59 cyclists died in collisions in rural areas, while 43 died in urban areas.

Many crashes involving bikes on rural roads are because drivers are travelling too fast.

Slowing down will help you to take sharp bends more safely and you will be more likely to spot riders in front of you. Brake