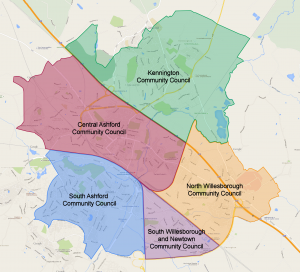 “As stated in the original literature sent to residents in the relevant areas, the results of the ballot (for and against) are non-binding on the council and are one part of the consultation process. However, the result will inform the decision of council members in December.

When taking that final decision on whether to recommend the creation of community councils, councillors will take into account a number of important factors, including:

All of these matters will be taken into account and considered carefully by Councillors before a final decision is made.”

On 3rd December 2015, Ashford Borough Council’s Selection and Constitutional Review Committee recommended that the Council follow the Community Governance Review ballot outcome; creating Community Councils in Kennington and South Willesborough and Newtown, not in South Ashford, Central Ashford and North Willesborough. The final decision will be taken at a full Council Meeting next Thursday, 10th December.