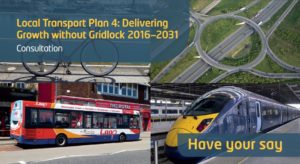 A copy of the response is available at https://southashford.org.uk/index.php/category/consultations/kltp/ or can be downloaded as a pdf.

The Draft Local Transport Plan and associated documents are available from the KCC website:
http://consultations.kent.gov.uk/consult.ti/LTP4/consultationHome

The draft Local Transport Plan sets out the following Ambition for Kent:

To deliver safe and effective transport, ensuring that all Kent’s communities and businesses benefit, the environment is enhanced and economic growth is supported.

Q3. To what extent do you agree or disagree with the overall Ambition set for the Local Transport Plan?

Q3a. Please add any comments on the overall Ambition set for the Local Transport Plan

Q4. This Ambition will be realised through five overarching Outcomes and Supporting Policies. To what extent do you agree or disagree with each of the Outcomes and Policies?

Policy: Promote affordable, accessible and connected transport to enable access for all to jobs, education, health and other services.

Policy: Provide a safer road, footway and cycleway network to reduce the likelihood of casualties, and encourage other transport providers to improve safety on their networks.

Policy: Deliver schemes to reduce the environmental footprint of transport, and enhance the historic and natural environment.

Policy: Promote active travel choices for all members of the community to encourage good health and wellbeing, and implement measures to improve local air quality.

Q4a. Please add any comments on the five overarching Outcomes and Supporting Policies

Q5. To what extent do you agree or disagree with the Strategic Priorities for the Local Transport Plan? (Pages 11 to 21 in the LTP)

Q6. To what extent do you agree or disagree with the Kent-Wide Priorities for the Local Transport Plan? (Pages 22 to 23 in the LTP)

Q6a. Please add any comments on the Kent-Wide Priorities for the Local Transport Plan below:

Q7. To what extent do you agree or disagree with the District Priorities [for Ashford] for the Local Transport Plan? (Pages 41 to 42 in the LTP)

Travel in Ashford is currently dominated by the private car, but the area is largely flat which makes travel on foot or by bicycle easy and feasible. The M20 runs through the district and bisects the town, connecting the area with the Channel Ports to the south and Maidstone and London to the north. Generally, the M20 operates with spare capacity but when Operation Stack is called the town is heavily congested as all motorway traffic is diverted via Junction 9 through the town. Further, the capacity of Junction 10 is restricting development to the south of the Ashford urban area, as both strategic and local traffic place high demand on this junction. A preferred route for a new motorway Junction 10a has been identified and Highways England is currently progressing towards the submission of a Development Consent Order (the approvals process for major infrastructure) to Government in 2016. Ashford is a growing town and development pressures on the transport network must be considered.

Ashford is historically a railway town and consequently it has rail connections to Maidstone, Canterbury, Tonbridge, Folkestone and Hastings, as well as internationally via the Channel Tunnel. The bus network includes urban, inter-urban and rural services; and Stagecoach is the main bus operator in East Kent.

The A28 Chart Road improvement scheme is critical to the delivery of 5,750 homes at Chilmington Green and the reduction in congestion along this route is a priority scheme for both Ashford Borough Council (ABC) and KCC. ABC also plans to promote Ashford as a Cycling Town. The delivery of an improving cycle network and the doubling of cycle parking at Ashford International Station in 2015 (as well as its 2010 Station of the Year award in the National Cycle Rail Awards) provide opportunities to capitalise on the use of this mode of transport.

Q7a. Please add any comments on the District Priorities [for Ashford] for the Local Transport Plan

Final comments on the Local Transport Plan below:

Q10. Please add any final comments you have on the Local Transport Plan below:

Although Outcome 4: ‘Enhanced environment and Outcome’ 5: ‘Better health and wellbeing’ can be achieved by reduction in car usage and use of low emission road vehicles, there should be reference to these as priorities.

Specific measures to achieve these objectives would include: