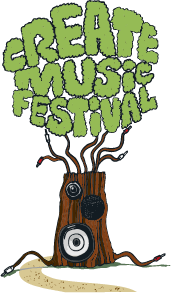 The Create Music Festival, held annually in Victoria Park, scooped Cultural Event of the Year at the 2017 Kent Creative Awards on Friday 19th May.

The gala ceremony, hosted at Ashford School, recognises creative individuals, projects and organisations for their worthwhile contribution to Kent Culture. Upon receiving the Kent Culture award, organiser and council officer, Chris Dixon, gave thanks to all those who have contributed to the festival over its 22 year history.

Create is now one of the South East’s biggest free music festivals, taking place every July in Victoria Park, and is set to get even bigger! This year, Create will be like no other year, as it branches out to launch Create Platform, a new week-long programme of events across Ashford that leads up to the big day.

Create Platform promises uniquely themed exhibitions, concerts and street entertainment in spaces you would least expect them. Prepare to Dance in the Streets with Bowie, Take the Ska Train with Teflon, picnic with Mr Harper, get arty with a latte, and get scribbling with The Doodle Man!

Other Ashford award winners and successes on the night were Revelation Ashford who achieved Cultural Venue of the Year, and Derek Himsley, based at Evegate Art Gallery, who received a special mention for producing outstanding work and for having a particular impact within the community.

Christina Fuller, Head of Culture for Ashford Borough Council, said: “All these local achievements is a recognition of all the efforts that go in to building the cultural offer in Ashford, and the council is confident we will see even more success in the future as the town and the borough continues to grow.”

The line-up for Create Music Festival’s 22nd year has been announced.

Create 2017 is already lining up to be a big year with ska legends, The Selecter, announced as the headliner. More bands and acts have now been added to the packed programme of musical indulgence on Saturday 22nd July in Victoria Park.

The Create Main Stage, which is sponsored by Ashford College, will include popular local favourites Riskee & The Ridicule, Salvation Jayne, and the Paul Dunton Orchestra. They will be supported by a team of Ashford College Music Technology students who will be working behind the scenes.

Premier music and arts venue, Revelation Ashford, has once again programmed in an eclectic mix of high quality independent music for their stage, supporting some of the best bands, singer-songwriters, and emerging young folk artists emanating from Kent.

Headlining the Revelation Ashford stage are Kent’s garage rock band, The Bay Rays, who come fresh from their recent BBC Radio 1 Maida Vale session with Huw Stephens, as well as their smash show at Revelation Ashford earlier this year. Also supporting this stage are The Scorchers, The Gallerys and Ashford’s Himali Blues.

Fans will have noticed that announcements are yet to be made for the legendary Create DJ stage, but can rest assured that an awesome line-up will be laying down the very best of house, EDM and club anthems.

What’s more, following on from last year’s memorable performance from David Live, the David Bowie tribute act will return for a special two hour show at Revelation Ashford the night before Create.

Create Festival Organiser, Chris Dixon, said: “We are delighted with the line-up so far.  Our ‘apply to play’ request once again exceeded all expectations, attracting hundreds of applications from all over the world.

“We believe this line-up is a good mix of high quality local bands, a few up and coming artists from further afield who have a genuine interest to play here, as well as providing a platform for some individuals to play in front of a crowd for the very first time.”

Download and read magazines via Kent Libraries for free

Travelling around and want something to read but you don’t have the time or room to grab a few magazines for your journey?

Want to check out the latest issue but don’t want to wait for the library to open?

Now you can download electronic versions of some of the most popular magazines for free via the Kent Libraries website.

As part of a one year pilot looking at new ways of providing services to the people of Kent, anyone with a Kent library card will be able to login to the Zinio service and read and download electronic copies of the latest issues of magazines. END_OF_DOCUMENT_TOKEN_TO_BE_REPLACED

The line-up for Create Music Festival’s 21st Birthday has been announced, although the headliners are still being kept under wraps!

On Saturday 23rd July, Victoria Park will once again host one of the South East’s biggest free music festivals, and has lined up a packed programme of music indulgence with over 40 local, talented bands, acts, solo performers, choirs and DJ’s performing across the day.

The brand new Fountain Stage sponsored by Right Track Music will once again showcase a whole host of up and coming musicians that emerge from the school, as well as community groups, choirs and young local talent.

Fans will have noticed that announcements are yet to be made for the legendary Create DJ stage, but can rest assured that an awesome line up will be laying down the very best of house, EDM and club anthems.

Following on from last year’s memorable performance from Adam Ant, the festival is still keeping all the headline acts of each stage close to its chest, but has teased all music fans that they are in for an equally impressive, musical treat for this year! END_OF_DOCUMENT_TOKEN_TO_BE_REPLACED

Ashford Borough Council have announced that the 2016 Create Music Festival will be held on Saturday 23rd July in Ashford’s Victoria Park. ABC say in their announcement “due to public demand, Create will switch from its usual Sunday slot, hoping to encourage an even bigger festival feel for the town”.

The new Saturday date falls on the 175th birthday of George Harper, the man who kindly gifted the exuberant Fountain to Victoria Park in 1912. To mark this, festival organisers will be introducing a new “Fountain Stage” showcasing young local talent and community music groups. It will however prevent an event similar to last years Mr. Harper’s Birthday celebration which was attended by a large number of younger children. END_OF_DOCUMENT_TOKEN_TO_BE_REPLACED